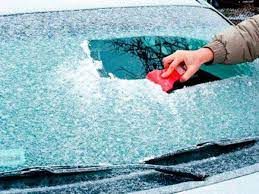 It is true that another Filomena has not yet arrived, but who knows. This winter is being especially cold and in many areas of Spain frosts at night have been common for weeks. You know it, among other things, when you go to get your car soon and you find that hateful ice on the windows. Calm down because today I explain in detail how to remove ice from car glass safely and effectively.

Because you should know that there are many hoaxes and urban legends about removing ice from the car. There are customs that many do to remove ice from the car and not only are they not effective, but they could damage the window or the bodywork itself. So today I explain the best ways to do it.

How to remove ice from car glass

If your car is one of those that has to sleep on the street, the ice will have made you waste more than a while waiting for it to disappear so you can drive. And in the mornings at some degree below zero that is quite unpleasant.

There are some products at auto supply stores to remove ice from the windshield. Although it is not necessary sometimes, they can be of great help since some are really effective.

How not to remove ice from the car windshield

One of the ways that many use to remove ice from the car windshield is with hot water. It’s not good practice and you shouldn’t do it.

In general, any technique that involves a change in temperature will not do you any good.

You should also not use metal scrapers because they can scratch the glass and damage it. It is advisable to use a plastic scraper that does not have a particularly sharp edge, to drag the ice it is not necessary.

The heat that the car’s engine will generate when it starts is the best way for the ice to weaken properly.

In addition, it is recommended that you also turn on the heated rear window as the effect will be faster.

Putting the heating inside the vehicle will also help the ice to be removed faster. And by the way you are preparing to be able to drive in less “inhuman” conditions with the enormous cold.

Step 2. Use a scraper to remove the ice

The next thing is to use a scraper to remove the ice little by little.

Ideally, you should do it from the edges inwards. This way you avoid the accumulation of ice on the edges and also make it easier for the ice to melt thanks to the effect of the internal heat of the vehicle.

It is important that the scraper is made of a hard plastic material that is not particularly sharp. It is not necessary to remove ice effectively.

The ideal is to use one purchased for this purpose. There are many models in any car material store.

The use of a bank card or similar can also be used if you don’t have anything else on hand, but there is a risk that it will be damaged. I recommend that you only use this option in an emergency and if you do not have a specific scraper.

It should also not be a metal scraper as it could damage the glass and deteriorate it.

Step 3. Use the windshield wipers

Starting the windshield wipers is good to remove the ice that has already been detached from the glass.

Before starting them, check that they are not stuck to the glass due to the effect of ice. If so, try to take them off beforehand and wait a bit for the temperature of the car’s engine and interior to take effect.

Keep in mind that if you try to activate them while you are glued to the glass, you could break the brushes or even damage your motor.

WATCH OUT! It is not good that you activate the liquid if the liquid of your windshield wiper does not have an antifreeze product. If it is water, the safest thing is that when you pour it on the glass it will also freeze. This will only increase the problem of ice on your crystals.

Other resources to remove ice from the windshield

There are other resources to remove ice from car windows:

– Products to defrost. There are special products on the market that allow you to quickly remove ice from any glass without damaging it. They are not especially expensive, so they can be a good resource in areas where ice is quite frequent.

– Remove ice from the car with alcohol. This is also a good resource. Mainly because alcohol has a much higher freezing point than water.

Dangers of removing ice from the car in the wrong way

Lastly, I will tell you some of the risks and dangers that exist when removing ice from the windshield wipers if you do not pay attention. You can damage the car, the windows or any of its components. Keep an eye out for these customers.

– Be careful not to break the brushes If you start the windshield wipers before they have cleared of ice and are not stuck to the glass you can break them. And what would be worse, you could even damage the wiper motor itself.

– Remove ice from headlights In case of ice, care must be taken to also remove ice from the headlights and all the lights. If not, its effectiveness will be greatly reduced while driving and it could cause worse damage: a lack of visibility for other drivers or poor lighting while driving.

– Do not put the heating too high Setting the interior heating too high at first could also cause some damage to the glass. This is due to the difference in temperature between the outside and the inside. One of the biggest dangers for the windows of any car.